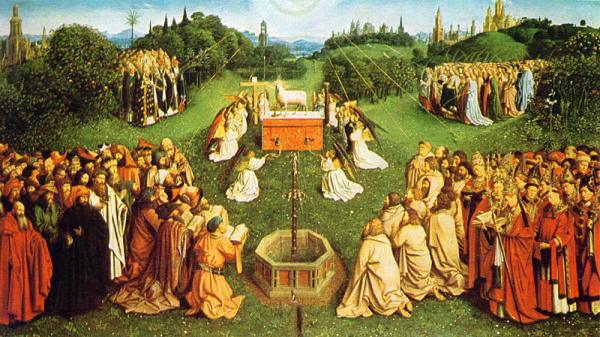 “Oh when the saints go marching in…” It’s a great old song that gives voice to an even older Christian hope, that when the kingdom comes, we ourselves will be among the holy ones streaming through its pearly gates, dancing down its golden streets, cavorting in its heavenly fields, and sampling its thousand sacred sweets—speaking figuratively, of course. (Except for the sweets. The sweets had better be real!)

“Oh when the saints go marching in…” We sing it with  happy gusto, completely oblivious to the little bombshell tucked away in the third line of all the verses. Did you notice it? “Oh Lord,” the third line says, “I want to be in that number…“

Oh! There’s a number. When the roll is called up yonder, a number of saints will go marching in.

Now, when I sing, “I want to be in that number,” I really mean it. And despite recent reports of declining belief in heaven among liberal Protestants, I’m willing to bet that you want to be in that number too. But ‘number’ might mean that not all of us will be marching to Zion. ‘Number’ could imply a limit. Think ‘bouncer at the door with an official guest list,’ or ‘guy with a clicker standing under the maximum occupancy sign posted on the Pearly Gates.’

What if that’s the case? What if we’re not on that list? What if we dawdle and arrive to find heaven already at full capacity? What if we’re turned away? A cartoon shows a befuddled man standing before a desk in the clouds. St. Peter is behind the desk scowling at him, his quill pen hovering over the Ledger of Life. The man says to Peter, “Nobody told me I needed to bring my receipts.” What if we forget to bring our receipts?

“Lord, I want to be in that number…” How many are we talking about here? Just how big is ‘that number’? And will we be in it?

In the Middle Ages, the vast majority of Christians operated on the gloomy assumption that they were not going to be in that number. The church gave them lots of spiritual means for slogging their way through this earthly “vale of tears” towards the heavenly realm, but in the medieval way of believing, arriving was never a slam-dunk, no matter how often or well you made use of all those sacraments, indulgences, and intercessors.

It was widely believed that monks and nuns had a better chance at getting through heaven’s gates than the hoi-polloi did.  A monastic life removed you from all sorts of temptations—the relentless allure of the world, the flesh and the devil. In theory, anyway! But every day of their lives, ordinary Christians had to engage in tainted things like commerce, politics, and sex. And that meant they were always sinning. Thus, it was mostly those famous miracle-working, life-and-limb-losing, inimitably virtuous, perfectly perfect, officially-certified, canonized saints who got to be in that number. How many? Not many. 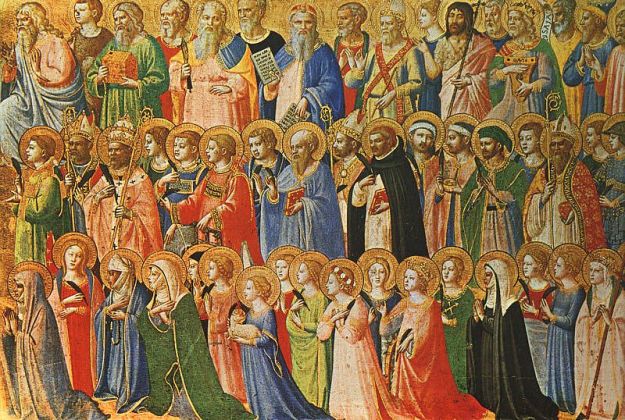 The idea that not everyone gets to be in that number did not pass away with the Middle Ages. Many Christians still expect the number to be limited. One newer American religious movement even teaches precisely what that number is going to be. It’s derived  from the Book of Revelation—one hundred forty-four thousand. One hundred forty-four thousand men and women “sealed for God,” which is to say, ‘marked as God’s own.’

(By the way, practically everybody in the Book of Revelation is marked in some way—whether you belong to God or Satan is something you can see.  Satan’s people are marked with the number 666. That was my telephone exchange when I lived in Somerville, MA. Some fundamentalist Christians in my neighborhood complained about it to the phone company, and so they offered everybody new numbers. I kept my old one. I loved it that people had to dial 666 to reach a minister. But I digress…)

These folks believe that when the trumpet sounds on the Last Day, one hundred forty-four thousand special believers from their community of faith will be ushered right into heaven, and there they will reign forever with God. Others in their movement will reside for all eternity on a new, paradise-like earth. So, according to a recent census of this group, if the world were to end today, the new earth’s population would be five million five hundred sixty thousand saints, minus one hundred forty-four thousand special saints in heaven. If you’re not a member of this group, you won’t be in either of those numbers. But you won’t suffer eternally in hell, either. There’s no hell in their theology. You’ll be annihilated, quickly and completely.

If you’re tempted to think those beliefs are funny or bizarre, beware. The wagging finger points right back at our own Congregationalist history. A lot of our Puritan forbears believed in double prelapsarian predestination. Now, most of us don’t know prelapsarian predestination from a potted plant, so let me sum it up this way—long before Adam and Eve even suspected that there might be such a thing as forbidden fruit, God chose who would be saved and who would not. Because God is gracious, however, God’s election is not stingy. God has chosen to save an “innumerable multitude” of saints. Yet no matter how many people God elects and saves, it’s still a number. Not everybody is going to be in it, they guessed. Some people are going to be counted in a number that’s headed south, where it’s a lot warmer. 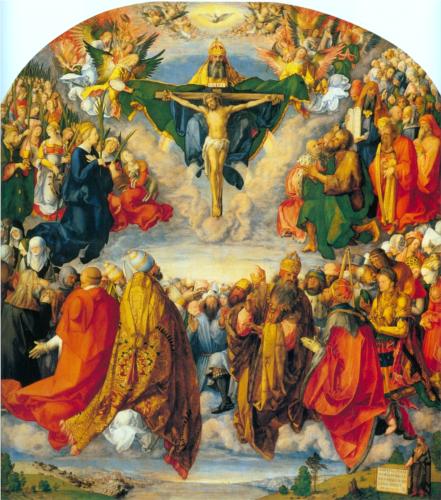 Did you notice the “I” in our song? “Oh Lord, I want to be in that number.” Throughout Christian history, ‘I’ have always wanted to be in that number, but ‘I’ have rarely wanted you to be in that number alongside me. Fred Phelps didn’t expect to see any gay people when he got there (imagine his surprise!). Most fundamentalist and some evangelical Christians preach that unless you explicitly accept Jesus Christ as your personal Lord and Savior, you won’t be joining that number either. And it wasn’t all that long ago that nearly all Protestants believed Catholics wouldn’t go to heaven, nearly all Catholics believed Protestants wouldn’t go to heaven, and nearly all Christians believed that non-Christians wouldn’t go to heaven. (If everybody’s right, then nobody’s in heaven! And with all our violent squabbling over heavenly turf, I’m sure there are moments when God would prefer it that way.)

These days, thankfully, we’re a bit more inclusive. Well, a lot more inclusive! Catholics have done away with Limbo so that unbaptized people can now enter paradise instead of languishing forever in an in-between state, deprived eternally of the presence of God. Most Christian churches don’t consign suicides to hell anymore, in some cases owing to a deeper grasp of the complexities of depression as a form of mental illness. And in liberal Christian circles over the last generation or two, we’ve been steadily backing away from the traditional Christian conviction that there’s only one way to salvation, through the grace of Jesus Christ.

Indeed, in the UCC we break out in hives if someone even hints at excluding anybody from the procession of the heaven-bound. We expect God to elect absolutely everyone, no matter who they are, or where they are on the journey of faith. We don’t think you have to be a Christian to go marching in, let alone a particular flavor of Christian. 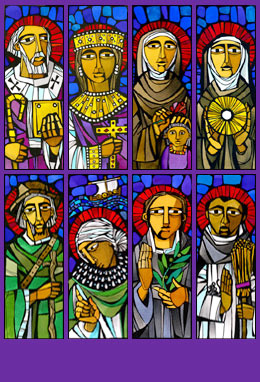 We also aren’t fond of the idea that Christian saints are exceptionally heroic and holy—the few, the fine, the famous, and the dead. With St. Paul, we say that to be a Christian saint, it’s enough to be baptized and to desire to live a new life in Christ—whether you’re living or dead, ordinary or extraordinary, you qualify. You’re a saint the minute the cat drags you in over the church’s threshold!  Especially if you sign up for a committee. Nothing canonizes you faster in our tradition than filling a vacancy on the Board of Christian Education.

These days, it seems that we mainline Protestants can’t think of anybody who’s not going to be in that number. Of course, it’s easy for us to say that. It’s easy for us to say anything we want about a total mystery we know nothing about. All the same, and speaking just for me, I’d rather be lax and rule everybody in, not strict and rule a bunch of people out. It seems to me that although lowering the bar as much as we do these days might have some moral downsides, it’s a far less violent way to go than its opposite.

Because ruling people in or out of heaven is not some quaint, innocuous theological game. It isn’t merely theoretical. It has consequences. If somebody thinks you’re unworthy of the next life, they probably think you’re unworthy of this one too. History is littered with the battered bodies of everybody’s excluded infidels and heathens. How we think about ‘that number’ really matters. And so it also matters what Jesus says about it. Let’s listen to him.

In the famous gospel passage about the sheep and the goats that we read today, you’ll notice that Jesus doesn’t say how many people will inherit the kingdom. What he does tell us is how to get there. And for that, the only number that counts is the number one. Listen! “Whenever you did it to one of these least, a member of my family, you did it to me.” One, fed. One, clothed. One, comforted—one is the number that counts.

I honestly don’t know if there’s a predetermined cap on how many of us will one day go marching in, but I do know that we have good warrant for setting the bar so low. Our brother Jesus was there before us, doing exactly the same thing. If you go by what he says in this passage, anybody can be in that number, because anybody can make one visit, cook one meal, throw one warm jacket over a pair of shoulders hunched-up against the cold. 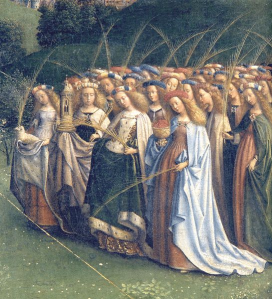 You don’t even have to do it for God! Maybe you don’t even have to know God! The sheep, after all, had no idea that they’d been lending a hand to Jesus. “Lord, when did we see you hungry, or thirsty, or naked, or homeless, or in prison, or sick?”   We know when. “When you did it to one…”

But even more, it has to do with the mercy of God, the one we know in Jesus, who opens the divine hand to us all and bestows largess beyond all telling, requiring so little of us in return for so much.

Praised be God by all God’s precious saints and by every creature under heaven, now and in the endless age to come. 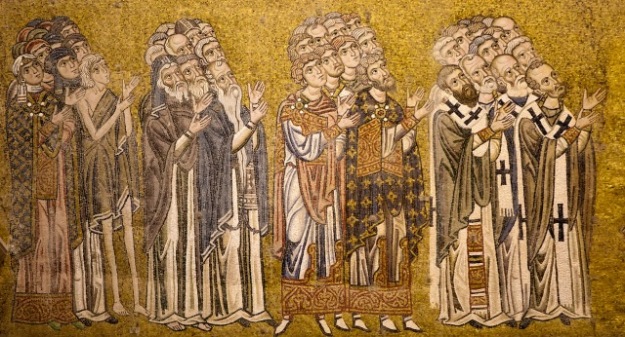 1 thought on “Lord, I Want to Be in that Number: A Sermon for All Saints Day”