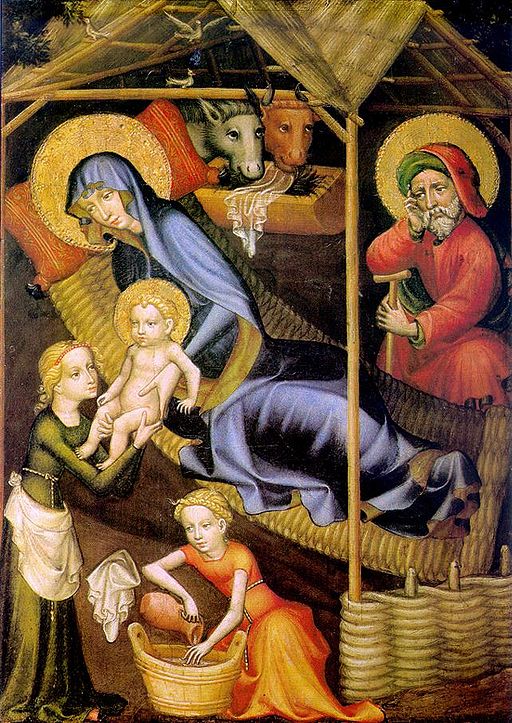 Some congregations observe a sharp distinction between the seasons of Advent and Christmas. In Advent, they sing Advent songs. And pretty much only Advent songs. Which means that they don’t even start singing Christmas carols until everyone else is sick of them.

I’m glad some churches save Christmas songs for Christmas. Not only is it more liturgically correct (so say the purists)—it’s also safer. I’ve found that if you sing carols often enough, you actually start paying attention to the lyrics, and when you do that, you have questions. Take carols that sing about “Mary, Mother mild.”  How many mothers do you know with crying infants at the breast who are ‘mild’? More like on the verge of a sleep-deprived nervous breakdown.

There are other dangers too, such as the invention of goofy lyrics. Sing carols long enough and sooner or later someone will wreck them for you. That old chestnut, “Good King Windshield Glass,” comes to mind, but I am particularly fond of “While shepherds washed their socks…”

While Shepherds washed their socks by night,

All seated ‘round the tub,

The Angel of the Lord came down

And gave them all a scrub.

And If you were ever in elementary school, you know this one:

We three Kings of Orient are

puffing on a rubber cigar.

That, by the way, is the American version. The Liverpool version is all about underwear sold in Hamilton Square for two pence a pair—So fantastic! No elastic! Not very safe to wear. And not very safe to sing, either.

There’s a downside to saving carols for Christmas. You don’t have much time to sing them, because the Christmas season is a mere blip on the annual liturgical screen, barely 2 weeks long (if you don’t combine it with the 4-8 weeks of Epiphany). And there are so many to sing! Thousands just in English alone!

All liturgical niceties and regulations notwithstanding, the sheer volume of carols and hymns is probably a good reason for sneaking a few in ahead of time. Here are three to start with.

I. The Huron Carol (“’Twas in the moon of wintertime”)

“The Huron Carol” was set to a 16th century French tune, but its words were composed in the Huron language by a Jesuit missionary to New France, or Eastern Canada, St. Jean de Brebeuf. De Brebeuf is among the most sympathetic of all the characters in the harrowing story of the 17th C. Jesuit mission to North America. He deeply loved the people he had been sent to evangelize, and like a good Jesuit, he made a serious effort to learn, document and preserve their language and the world of their imagination.

The carol he wrote quickly became part of Huron tradition. It was sung by Christian Hurons in Ontario until 1649, when the implacable Iroquois wiped out the Jesuit mission and drove most all the Hurons to Quebec. There the carol re-emerged and was eventually translated into English and French.

Originally called “Iesous Ahatonnia” (ee-sus a-ha-ton-nyah,  Jesus, he is born), the English interpretation we have here is the work of the early 20th century Canadian music critic and choir master, Jesse Edgar Middleton. Middleton added images he thought would sound Indian, like the lodge of broken bark and the beaver pelts. Today these inauthentic “aboriginal” terms come across as Walt Disney-ish, even condescending.  But the carol has nonetheless become something of a Canadian national treasure.

The Huron dialect in which it was written is now extinct, but we have a reliable reconstruction of the original hymn. It’s a text that shows the respect de Brebeuf had for the Huron converts as human beings and Christians.  It also hints at the seriousness with which he must have wrestled with the perennial questions that arises in every encounter of civilizations—the possibilities and problems of learning to speak the language of the Stranger, in a way more profound than the mere mouthing of syntax and vocabulary.

It also makes me reflect on the ways in which God’s embrace of our human life, the Incarnation, is for us the emblem of all such border crossings. The living God in Jesus is the prototype of every encounter with the Other that inevitably changes us, them, and everything.

Here’s part of that literal translation:

Have courage, you who are humans;

Behold, the spirit who held us prisoners has fled.

Do not listen to it, it corrupts the spirits of our minds.

Sky people are coming with a message for us.

They are coming to say, “Be on top of life!”

Marie, she has just given birth.”

Jesus, he is born

Three elders have left to go there

Tichion, a star that has just appeared on the horizon,

They found him, the one who is for them,

They made a name many times, saying,

They greased his scalp, saying “Hurray.”

Let us show reverence for him

as he comes to be compassionate to us.

How providential it is that you love us

and that you say, ‘I should adopt them.’”

Listen to the Huron Carol….as performed by Chanticleer.

II.  The Friendly Beasts (“Jesus our brother, kind and good”) 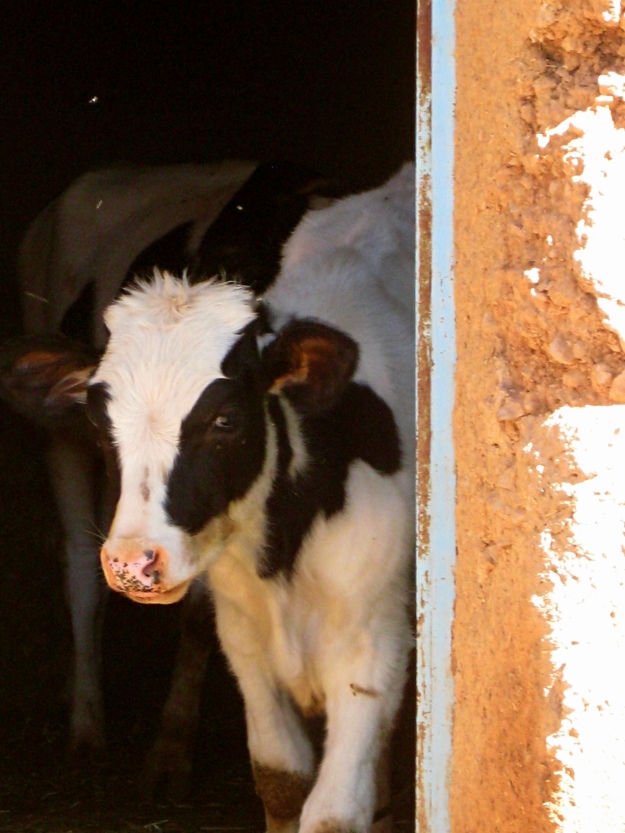 In the Christmas pageants of my youth, this longish carol was the traveling music for Mary and Joseph. It was also always a bone of contention.  Its seven or eight verses got doled out to eleven and twelve-year old soloists. Invariably, the kid who got assigned the cow verse refused to sing it. Who wants to sing, “I,” said the cow…”?  And if it wasn’t the cow, it was the ass. So in the interest of spreading the humiliation around equitably, when you sing it in your church be sure to have the whole congregation sing all the verses of this great galumphing little tune.

There are many opinions about its origins, but it was probably part of the medieval Festival of the Ass celebrating the flight of the Holy Family into Egypt, and was a regular Christmas observance in parts of France in the 13th century. During the mass of this festival, it was common for a live donkey to be led or ridden into the church.

The original song gives thanks for the donkey on which Mary rode into safety in Egypt, and begins: Orientis partibus Adventavit asinus (‘From the East the ass has come’). Each verse ended with the chorus ‘Hail, Sir Ass, hail’ and was punctuated with a rousing oh-heh, which is Latin for hee-haw.

I probably should not have said that, because now you’ll want to do that hee-haw part in church….

From the East the donkey came,

Stout and strong as twenty men;

Faster than the deer he leapt,

With his burden on his back;

Though all other creatures slept,

Still the ass kept on his track.

Still he draws his heavy load,

Fed on barley and rough hay;

Pulling on along the road.

Donkey, pull our sins away!

Wrap him now in cloth of gold;

All rejoice who see him pass;

On this feast day of the ass.

The carol as we have in our various hymbooks is an expanded and somewhat sentimentalized version of that original, and today it is regarded as a children’s song. But no matter how much fun was made around the figure of the donkey in the Middle Ages, the song was always meant as a serious tribute to a creature of God, without whom the work of our redemption would not have been possible. It speaks of the way God uses all the things God made to work God’s will and show God’s love.

What we might take from this carol, apart from the jolly spirits of the high Middle Ages, is a new sense that the salvation promised from of old encompasses not just the human creation, but all creation; that Christ was born into a real world that God really loves, and that everything in it, even some silly looking animals (like us!), is shot through with divine grandeur.  In an age in which the ancient ice shelf is melting into the Arctic sea and the polar bear is on the endangered species list, that’s a good and necessary thing to sing about.

Listen to it here…

III. Go Tell It on the Mountain

This familiar spiritual was born in the oral culture of enslaved Africans in the American south. As is the case with most spirituals, its music and lyrics cannot be attributed to any one person, but “Go Tell It on the Mountain” has a peculiar association with The Fisk School, now Fisk University in Nashville.

The Fisk School was established in 1866 to educate everyone, including freedmen, but quickly became known as a school for African Americans. To raise money for Fisk, a group called the Jubilee Singers was formed and began touring the nation.

At first ridiculed for their unimpressive looks, the group eventually won the public over, and in seven years they were able to erase the school’s $150,000 debt.  The songs they popularized were known as Jubilee Songs.

“Go Tell It on The Mountain” was one of two from their repertoire that have become household words (the other being “Swing Low, Sweet Chariot”).

African America composer John Wesley Work, who taught classics and history at Fisk, included it in a songbook he published in 1907, and it has been a staple of the Christmas repertory ever since. Work himself used to lead singers around the campus before sunrise on Christmas morning singing “Go Tell It on the Mountain,” as a way of announcing the good tidings of the day.

In thinking about this spiritual, I recalled that James Baldwin borrowed it for the title of his first novel, published in 1953. That book is a searing portrayal of black life in America, of lives horribly damaged by racism, and of a society confronting inevitable change in the civil rights movement.

It struck me that “Go Tell It on the Mountain” is no tinsel-thin holiday song, but the strong and resilient song of a people for whom good news has always been in short supply. The song of a people who endured unspeakable inhumanity as enslaved women and men, but still found the courage to endure even more as they stood up to act, and to demand that others act to recognize and respect their humanity—the same humanity that God was irrevocably committed to in the newborn flesh of Jesus. The song of a people who understood, in Baldwin’s words, that “To act is to be committed, and to be committed is to be in danger.” It’s not for nothing that in the 1960’s civil rights movement, “Go Tell IT..” was sung with the words, “Let my people go” substituting for “…that Jesus Christ is born.” 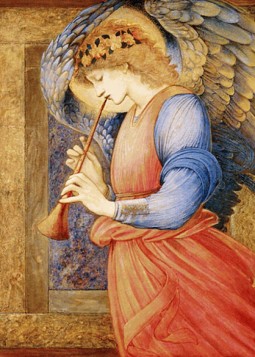 Whenever you sing this wonderful spiritual, pray that it will be a thick, strong song for you and your congregation too. And pray that when we go and tell the good news of Christmas on the mountain, over the hills and everywhere, we will by that act commit ourselves courageously to the redeeming danger of the gospel as well as to its resounding joy.

One of my favorite renditions, by Mahalia Jackson: