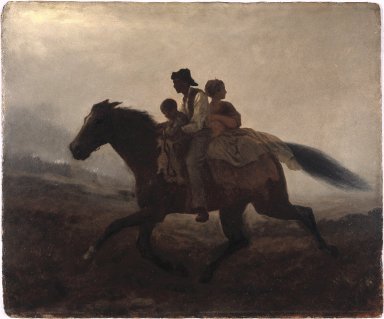 Unlike Luke’s story of Jesus’ birth, Matthew’s has no journey home to be counted, no overbooked inns, no shepherds, no manger, no swaddling clothes. Instead, Matthew has Joseph and Mary already living in a house in Bethlehem, their own house, presumably; and it is there that the Magi visit the child Jesus and give him gifts.

After the Magi leave, an angel warns Joseph in a dream that Herod is coming after the Child. The tyrant is prepared to slaughter many children to be sure he’s rid of one. Joseph should take his family and run for it, the angel says; cross into Egypt. Stay there until the tyrant dies.

Here’s what I wonder…

After he woke up, and while he was still shaking from the dream, and after they had packed a few things and saddled up the donkey, did Joseph take the key to the front door of his house in Bethlehem, string it on a rawhide cord, and tie the cord around his neck?

Or did he give the key to Mary after he boosted her onto the beast, handing up the child first, and then the key? Did she tuck it in the travel bag underneath the diapers and the talcum powder and the brand new copy of Goodnight Moon?

At the end of their street, did Joseph stop and turn around? Did he look back at the house they had just abandoned, one ear cocked for the hot breath of the horses, the other for the boots of bloody soldiers, conscripts most of them, kids, just following orders?

Did he find it surreal that he, a terrified man fleeing with his family, was also, in that very moment, wishing he’d gotten around to fixing the creaking tread on the stairs, the one Mary said would come right up some day and trip her, sending her headlong down the narrow flight? Did he say to her with his eyes, “Hold onto that key. Don’t lose it. I’ll fix the stairs, really I will. As soon as we get back…”

And when they made it over the border and found a place that rented to people without papers, did he wrap the key in a cotton cloth and place it in an olive wood box with leather hinges and a brass latch, and place it in a niche in the wall, and cover the niche with an old calendar from a company selling insurance?

And on days when no one would give him work, or during the night when Mary was out cleaning offices, or that first time he realized that his toddler couldn’t remember anything about home and was acquiring an Egyptian accent, did he take the key from its niche behind the calendar and lay it on his palm and rock over it, singing songs of Zion in a foreign land? Did he dream at night of return? Or did the good St Joseph drink himself into a stupor over what was lost? Did he buy too many lottery tickets? Did he take out his rage on the furniture?

And when the news finally came that Herod was dead and they could go back home, did he take the key from the box, knot it back on the cord, and tie the cord around his neck? Or give it to Mary to put in her bag, this time tucking it into one of the little boy’s sneakers so that it would be easy to find if they got to their door very late on a moonless night?

And when they crossed the border again and discovered that the danger had not passed—because for the refugee, the exile, the poor, the person with the wrong race, the wrong religion, the wrong opinion, the wrong sexuality, the danger never passes—and Joseph decided not to go to Bethlehem where they had a house with a door that the housekey fit, but to settle up in the Galilee, what, I wonder, became of that key?

What did he do with a key that was useless in a new lock in a new house, a key that opened no doors in Nazareth? What became of the key that worked only in the lock of the front door of the little house in the little town of Bethlehem?

Here’s what else I wonder:

Whose necks do such keys hang from now? In whose bags packed for a midnight dash to the border are they tucked away underneath the baby’s shirts and the sippy cup that quacks like a duck when you squeeze it? In whose small boxes are those keys resting? Who is rocking on tired knees singing songs of home over them, like lullabies to a baby, or anthems to a flag, or offerings to a god?

And what traumas are being inflicted, what grievances are being nursed, what resentments are building, what terrors contemplated, what weapons amassed in the name of keys and locks and doors and houses and memories and dreams and towns and lands and borders and nations?

And is there an angel lingering over earth fierce enough to rouse us from our deep and heedless sleep? Is there any message frightening enough to alert us to the danger we’re in? Is there any light from heaven bright enough to show us this old story as our neighbor’s story, and as our own?

6 thoughts on “Housekeys: The Flight Into Egypt”