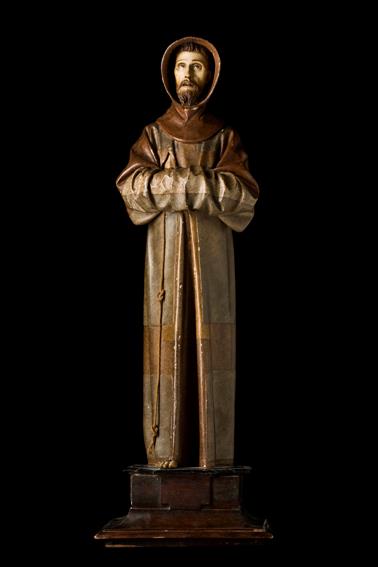 I like my saints wild. The fierce ones, oddballs, out of kilter, the ones with edges and cracks and terrible visions, the ridiculed and the feared. The ones who sooner or later have to be tamed; who, with the passage of time and shifting angles of vision, must be edited so that you can read about them safely in prim collections of hagiographies, no longer strange, but ‘best-loved,’ birdbath ornaments for your garden.

You know him—the “make me a channel of your peace” saint. The saint who preached to birds and did behavioral therapy with wolves. The environmentally aware, all-natural, organic saint of harmonious convergence. All that and more. And so much more. For Francis was free. So free, he was dangerous.

He was a young dandy, rich and frivolous. And attractive. He spoke French and sang ballads and threw parties. He harassed street people and had his way with women and was more trouble than his first biographers wanted you to know. Everybody knew him. Most everybody liked him. It wasn’t clear that he liked himself. He was restless.

He wanted something. He felt that it was coming, but he didn’t know what or where or when. Something that mattered. So he went off to war in shiny armor on a handsome horse, hoping maybe it was glory. Loyalty and courage and glory might be the thing.

He returned wounded, traumatized, a haunted peacemaker, turned around by the special grace that flows from the fact of your own futility, that permanent sting in your misled heart and your useless flesh. After that, he could never flee his own flesh or anyone else’s. He was drawn to the useless.

He started paying attention in church. He heard the gospel: “Sell what you have and follow me.” So he gave away what he had. Then he started stealing from his father, giving away what he stole to make beggars warm. There were too many beggars to count.

He lived in the woods, hiked the mountains, prayed in their caves, and wandered around the olive groves beneath the town. He begged for his food, leaving a blessing in exchange. If there was nothing, he went hungry. If there was something, he shared. Dressed in a penitent’s tunic and belt, barefoot in rain and heat and snow, he was Lady Poverty’s mad courtier, pledging himself to her for life, and to her family of ragged and hungry, too many to count. To everyone’s revulsion, including at first his own, he embraced lepers, kissing their sores. Soon they knew him well in the leprosarium down in the valley outside the walls. He tended wounds. Townspeople pelted him with stones.

One day he was praying in the ruins of an old chapel and saw that a crucifix was still hanging inside. He gazed at it until it spoke to him: ‘Francis, repair my Church.’ And so he did, stone by stone. It is said that what Jesus meant was for him to reform his ‘capital C’ church, but Francis was a literal man. He was not one to do grand things when a tangible needed thing was in front of his nose. Before he was done, he’d repaired several abandoned chapels in and around Assisi, working with his rich boy hands until no one recognized him any more. He became a stranger.

But some young men of the town were moved by him. A few old friends, a relative or two. They joined him, then others came, too, unknown to Francis. All classes and conditions. Before he knew it he was in charge of a growing fellowship. He had no idea it would happen. He was ill-suited to leadership. And he was indiscriminate. He welcomed them all. Sometimes that was a mistake, and he ended up having to kick some bad men out. His companions urged him to put admissions policies in place. He didn’t.

He wanted the pope’s blessing for his growing band, so he walked down to Rome. Medieval Rome. Holy city, unholy cesspool. After some bureaucratic delays, Francis in rags got the blessing he wanted. Legend has it that at the end of his audience with the pope (whose name was Innocent, but who wasn’t very), the great man in ermine and gold came down from his throne, kissed Francis’ feet, and received his blessing.

He loved Sister Clare, who ran away from her noble house in the high part of town to learn to be like Francis. He loved Brother Leo and Brother Juniper and all the men who flocked to him, many of them exchanging, like Clare, finery and privilege for rags and humiliation. Francis wanted them all to be equals and so, among other things, he was wary of books and learning because of the pride and distinctions he believed they engendered. And he didn’t want the brothers to be priests. He loved priests because he loved the Eucharist—it was Jesus himself—and priests were the way you got it. But he wanted the brothers to remain small, menores. That’s what he called them—not the Franciscan Order, but Friars Minor.

His fiercest desire was for peace. More than anything pax et bonum, his habitual greeting. Which is why he is the patron saint of stowaways, having hidden on a boat headed east where he hoped to convert the Sultan to Christ and end the bloody fifth crusade. He was appalled by the Christian armies, their violence and immorality, every bit as much as he was afraid the Saracens would go to hell if they didn’t believe the gospel. He was struck by their piety, praying five times a day. They were also clean. The Christian commanders tried to stop him, but he snuck away under cover of night and crossed enemy lines. He got the audience he wanted, staying several days. Francis explained the good news to the surprised and curious Sultan. He did not succeed in baptizing him, but it is said that the Sultan thought Francis was a lovely man, the best Christian he’d ever met, and made sure he got back safely.

He tried for reconciliation everywhere, adjudicating local disputes, making treaties. Even, it is said, taming a ravenous wolf who was killing livestock and terrorizing people in Gubbio. The deal Francis struck with people and beast stipulated that the wolf would behave if the people fed him. Afterwards, whenever the wolf came trotting into town, newly meek and peaceable, he found food at the doors and left satisfied. The people said, as the wolf loped away, that he reminded them of Francis.

Francis was not naïve. He knew what he was up against. The onslaught of demons, the persistence of violence, the imperviousness of the haughty, the sluggishness of the Church, the sly corruption of error, and the betrayals of his own heart and body. But Francis loved Jesus, and with unhinged joy he sought to be like him down to the last detail of freedom and agony.

And so on days blistering and freezing, he and his brothers prayed and preached on street corners, demanding repentance, announcing mercy. Through nights dark and shimmering, he prayed alone, too; persistently, on a mountain, a half-demented mystic crying loud for Christ. The visions that came to him there were garish and beautiful and full of pain. It is said that on one such night, seraphim he saw in the sky cut the Lord’s own wounds on his scrawny body, his hands, his feet, his side.

And then the poor scarecrow lived just a little too long. Long enough to see his then thousands of brothers dispute his meaning, split into factions, grow to despise each other. Long enough to see new leaders reinterpret him. Saints’ deaths are sometimes bitter like this. Blind and gaunt, on his final night he asked the brothers to lay him on the ground, dust to dust. With his last rasping sigh in the morning he told them, “I have done my part. May Christ teach you to do yours.” He also said, “We have only begun to live the gospel.”

It wasn’t long afterwards that the new leaders began building a gigantic basilica to house his remains. Wildly beloved by the people in the final years of his life, the dead Francis was soon to be a wildly beloved and profitable saint. The way of the world. Our way.

Francis lives now with Jesus in the heaven of his longing. It is said that in the morning mist of Paradise, angels cannot tell the two apart. There are talking birds there, and reformed wolves, and singing water, and Leo and Clare. The Pope too, crooning duets with the Sultan. And there are lepers, thousands of lepers, rosebuds blossoming on their skin where Francis kissed them.