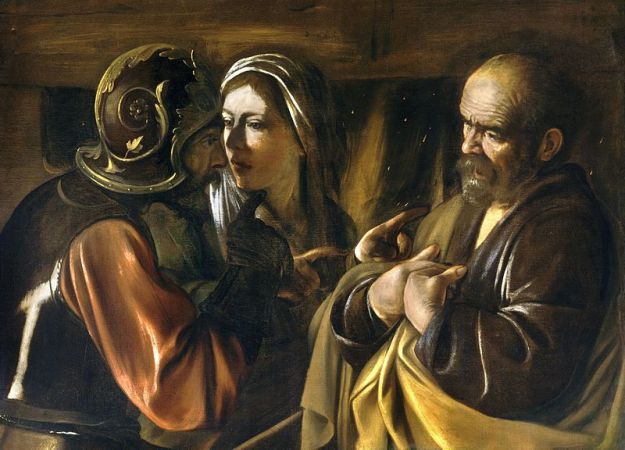 I think Christian tradition has been too hard on Judas and too easy on Peter. Judas sold Jesus to the authorities, but he never lied about knowing him. His betrayal was terrible, but it was up close, to Jesus’ face, sealed with a kiss, among friends. Peter kept his distance. He wouldn’t even say Jesus’ name. Among strangers he denied all ties to “that man.” He sought warmth by a fire while his Teacher was tortured. His renunciation was as cold as that night was cold.

Tradition turned Judas into the evil archetype of betrayers. In two places in scripture we are told that he met a gruesome end, and the implication is that it was well-deserved. In Christian imagination, he ranks just a fraction of a notch above Lucifer. Unforgivable.

Tradition turned Peter into the impetuous disciple who could never quite get or stay with the program, but whose heart was always in the right place. Peter was clueless, lovable, a little pathetic. And forgivable.

We are told that Peter wept bitterly when the cock crowed and he remembered Jesus’ prediction about his triple betrayal. We are told that Judas wept too. His remorse was profound. When he could not undo it, returning the silver, he despaired of forgiveness. He could not live with what he had done, We don’t know why Judas despaired, or why Peter did not, but because Peter held on, he became the symbolic heart of the nascent church. Because Judas could not hold on, he became an eternal embarrassment and a terrible shame.

I have reflected elsewhere on the regret I feel that the Story has Judas dead and gone before Jesus rises.* Every year at Easter, my imagination feels compelled to re-write the scriptural account to save him. If Peter lived to experience Christ’s mercy pour out for him from the empty tomb, why not Judas too, even though he died? Do you have any doubt that Jesus forgave him? Do you have any doubt that one of the fish on the fire that morning by the lake was for him?

We let Peter off the hook, but Peter did not. Even after the encounter at breakfast with the risen Jesus on the beach, even after making his triple affirmation of love, Peter never forgot what he did. When the time of trial came for him again, his legend goes, he refused to be crucified in the same manner as the Friend he did not deserve. He demanded instead that his tormentors nail him to the cross head down. I think the church would do better to remember Peter not as we have re-made him, a lovable bumbler, but as Peter knew himself, an unworthy betrayer of the first magnitude, on a par with Judas.

They are not that different, Judas and Peter. They belong close together in the church’s memory, not far apart, as if Peter were a success story and Judas a failure. As if the goal of discipleship were to get it right instead of to live in perpetual need of mercy, to know oneself permanently in need of healing, pardon, and peace.

These days, many congregations want to renew themselves. They ask questions about identity and purpose—who are we as a church, what is our mission, how can we be more faithful? Well, here is a model we might all consider to our benefit—the earliest church, which was nothing more than a few sinful, weak, mortified disciples huddled around a fire tended by Jesus, eating with him. A church composed of apostates, guilty of denials and betrayals and fearful flight. A church born not in rising to the occasion, but in running from it. A congregation of weakness and shame. A fellowship of the unforgivable.

The best thing any church could hope for is to be filled with Judases and Peters. People whose lives are marked by the humiliation and the humility that come from knowing exactly what they deserved but did not get. People whose actions in the church and in the world are characterized therefore by the most reverent tenderness for the weaknesses of others. For their cruelties and betrayals. For their unpardonable sins.

The straightest route to faithfulness any church can take is through human fragility, where the depths of guilt and shame are met by the unrelenting, anticipatory, all-covering, blame-withholding mercy of the Lord.

If what we strive for instead is a church of the strong, the good, the steadfast, the productive, the able, the clever, and the powerful (even the spiritually powerful) who are perfectly capable of cooking breakfast for themselves, we may never have a church at all. And we might never have a mission either, because feeding Jesus’ lambs, inviting the whole world to come and have breakfast, sharing with others the mercy bestowed once upon a time around a charcoal fire—these are not things you can do if you’ve never been around that fire yourself, waiting for the other shoe to drop, if you’ve never felt the joy of realizing it isn’t going to drop—ever; if you’ve never understood how much you actually owe, and how clean the ledger has actually been wiped.

It is precisely the ones who should never have been forgiven, but who were, who are called to tend Jesus’ sheep. It’s not something he entrusts to just anyone. He seeks out the worst for the job. And he makes them the best by love.

2 thoughts on “An Eastertide Reflection: Judas, Peter, and the Apostate Church”