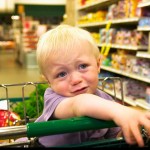 Not long ago, I was in the supermarket looking for something I couldn’t find. As I wandered around, I kept bumping into the same mother and child. The boy was probably three, and in a bad way, squirmy and demanding. His mother was admirably calm, considering, but her firm  “No, honey’s” got tighter as he made a dash for the cereal aisle. When he ripped open the Cheerios, she’d had enough. In one practiced move, she yanked the box out of his hand, plunked him down in the carriage and wheeled him to the register before he could summon a sound.

And it occurred to me at that moment that it’s a terrible thing to be three. You want what you want when you want it, but you can have only what grown-ups decide is good for you and convenient for them. You can manipulate adults to a point, but your power is limited by size and weight; because you are small, in the end they hold all the cards. If all else fails, they can snatch you up like a head of lettuce, toss you in a cart, and wheel you away.

It’s no wonder little kids like playing grown-up—they give the orders, they say yes or no. But we know, as we watch them, that it’s an illusory exercise in more ways than one. Children imagine that it would be a fabulous freedom to grow up, because grown-ups do whatever they want. Everything they desire jumps down from the shelf into their carts. Little ones don’t know about the fright of decision, the tyranny of choices. Even less do they know about shouldering the unknown consequences of any given yes or no. What we have learned, most of us the hard way, is that to be in charge of yes and no is even more terrible than being three.

It’s a great irony of adulthood that no matter what you decide with your grown-up will, you still have to negotiate what others think is good for you and convenient for them, and live with the deals you make. And the kicker is that even though you’re now supposedly in charge, you are never not at the mercy of a rogue circumstance that can without warning or consent snatch the yellow box from your hand like a fed-up parent in a grocery aisle. Even if you’re 6’5” and weigh 240, life can still toss you in its carriage and wheel you away.

When it comes to self-determination, we are no more in control or better off at fifty than we were at three. Wisdom, then, lies in considering the lilies; in the sort of striving that begins and ends in abandonment, that begins and ends by making a great embracing peace.

1 thought on “In Charge”