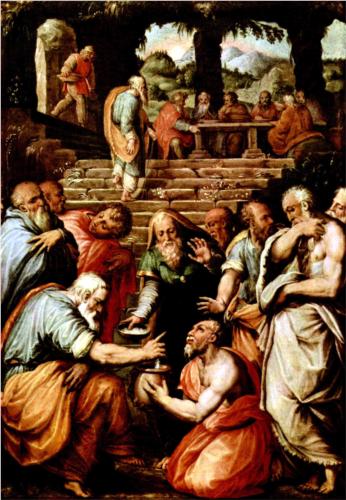 Years ago when I became a seminary administrator, a colleague at another school gave me some advice about dealing with the faculty: “Always remember, faculty members are people; and even when they have Ph. D.’s, publishing records as long as your arm, and noble religious motives, they still tend to act out of simple self-interest. So when you want them to do something, bank on the fact that they’ll invariably ask themselves, ‘What’s in it for me?’ If you figure out the answer before you approach them, you’ll go far in this business.” In other words, my job was to outfox self-centered intellectuals bent on advancing their own agendas!

Now, this struck me as pretty cynical, and it didn’t take me long to discover that it was not right: it was only partly right. If people acted only from self-interest all the time, it would indeed be easy to deal with them. But things are more complicated than that. It turns out that not only members of seminary faculties but all of us as well are motivated by a bewildering array of convictions, internal contradictions, needs, and frisky passions, many of which we are unaware of, cannot name, or don’t care to, and some of which, perversely, actually undermine our true self-interest.

Given this maze of self-asserting and self-subverting motivations, sometimes the most you can do as a leader is create conditions in which people can muddle along towards the goal the best they can, intervening only occasionally to keep them on track. Thus will the ragged human convoy of high-minded posturing, insecurity, piqued honor, hurt feelings, good humor, intelligence, and good will eventually wend its way to insight and accomplishment. The trick is not so much to outfox as to outwait.

I could have learned all this a lot sooner just by opening my Bible to the story of Naaman.

Here we have a proud and powerful man making his way towards health, a restorative knowledge of God, and a new understanding of himself; but only by fits and starts. What is in his self-interest is abundantly clear: to find a cure for the disease that threatens his career, his place in human company, his very life. When we see the huge amount of capital he takes with him to Israel, we can only imagine the sums he has already spent on specialists in Aram trying to find a cure, with no results. When the servant girl tells his wife about Elisha, the prophet in Israel, it has the anguished tone of last resort: “If only the master would go to Israel…”

If simple self-interest ruled Naaman, his story would be a lot shorter than it is. He would have gone to Samaria and done exactly as he was told. But since there’s more to human motivation, there’s more to the story.

You heard his rage when the prophet did not come out to him with all the fanfare Naaman thought he deserved. You heard his contempt for the simplicity of the plan, his haughty dismissal of the river Jordan. Where he comes from, the people are better-behaved, rivers course through their channels with power and beauty, and the gods are charming and sophisticated. Never mind that there was no cure for him there; Naaman craves respect even more than he craves health. He is so sure he knows what is right and fitting, so certain of what should happen, that he almost refuses the gift God is preparing to give him.

Almost, but not quite. Because it seems that God really wants him. And God’s mercy will wait him out. When Naaman doesn’t get the flashy respect he thinks is his due, God does not close the door on the offer of health, but lets Naaman go off to vent and strut. No lightning bolt consumes the pagan general in mid-rant, no disapproving angel descends to warn him off his temerious display of pique. God abides the tantrum until Naaman rids himself of our common human propensity to work hard against our own good. And when the servants appeal to the general again, when he finally relents and obeys them, we begin to glimpse in him what God has seen all along, a man of faith.

For we’d be wrong if we regarded his healing and conversion as something sudden, a shocking miracle. What God outwaited in the story of Naaman was not just the tantrum he threw when he felt dissed; what God patiently awaited was the fitful progress of a transformation that had been advancing well before Namaan set foot on the soil of Samaria or waded into the puny Jordan.

When, back in his own house, the great warrior stooped to accept advice from women, God’s grace entered that slender opening, germinated in him, and began its wait.

When this loyal Aramean subdued what must have been revulsion at the idea of asking for help from an enemy, the grace of that enemy’s God widened the fissure in his soul a little more, made even more room in his heart for wholeness.

When he gave up his rage, overcame his sense of entitlement, relinquished his sophistication, surrendered to his own servants, and headed humbly for the water, his healing was already well underway.

Long before Naaman waded out into the Jordan, God had already established a pulse of faith in him—an irregular one, perhaps, and weak; but enough of a pulse not to be arrested by his prideful rage. When the mighty Naaman finally decides to give the prophet’s cure a chance, he is already far enough along in his healing that there isn’t a lot more for the disagreeable Jordan to do. All that remains is to go into the water and meet, knee-deep in mercy, the One God who had, unbeknownst to him, engineered all his victories and who had, unbeknownst to him, always presided over his life. Once awash in this revelation, Naaman, “a great man” from the start, becomes God’s man for good, a servant of the Living One.

Naaman has come a long, ragged way. The man who derided the unappealing river and the bush league prophets of Israel now goes home with mule-packs full of Israel’s soil, so that back in Aram he may spread it our, kneel down on it, and worship God on holy ground.

Now, I would be deceiving you if I told you that this is the end of his story. But while we live, healing is always a work in progress, our lives are always unfolding, new afflictions come at us from the outside and eat away at us from within; and the great tangle of passions, weaknesses, desires, hopes and needs that impel us raggedly through this life never quits threatening to derail us. Naaman’s skin will be, by God’s mercy, new as a boy’s forever; but the integrity of his heart, the depth of his faith, the wholesome trajectory of his life? Well, that’s another story.

He’s come a long way, but for him and for us there is always an iffy road ahead. We will always be traveling back and forth from Aram to Samaria, from our self-subverting passions to liberation in the humble trickle of pardon and healing. We will always be tempted to spurn simple mercy in favor of some other more sophisticated solution to our basic brokenness. Our progress from self-subversion to graced immersion will always be ragged, full of fits and starts.

But the story of Naaman instructs us not to worry too much about our one-step-forward, two-steps-back advance on wholeness. There is such a thing as “progress enough for now.” God does not expect even the miraculously-cured Naaman be mature in faith completely and all at once. I think that’s why the prophet Elisha, who is usually very jealous of Yahweh’s prerogatives, does not hold Naaman to the highest standards after his conversion.

You heard their exchange: Naaman is sensitive to the fact that in serving his king back home, he may need every now and then, for ceremony’s sake, to go with him and pay respects to the old gods in the House of Rimmon. And so he asks for the prophets’ blessing on this unavoidable compromise.

Elisha could have invoked the first commandment and insisted on a no-compromise-with-idols policy. But he doesn’t. It’s almost as if God takes whatever God can get. Given the erratic character of our human procession toward wholeness and some of the deadly pitfalls lining the road, even the God who demands that we put “no other gods before him” is not as touchy as we think about a now-and-then concession to the status quo.

Progress enough for now. Maybe that’s the good news in this story for us, especially those of us who expect so much of ourselves that we become enraged with others when they fall short. After all, Naaman is no stranger to us. If we are honest, we see in ourselves all the irritating and endearing, weak and tenacious behaviors in this story: desperate need, consuming self-importance, offense-taking and feeling dissed, tantrum-throwing, pleading and cajoling, seeing reason, eating crow, giving in — and we’ve all secretly hoped to be permitted a few of our necessary compromises. So to watch God leave Naaman alone while never leaving his side is a huge relief. It is also a strong antidote to perfectionism, a bracing reproach to our thousand-and-one daily judgmental impulses, a real cause for gratitude and praise.

God outwaits us while in everyday weakness our healing begins. While we futz around in life, God locates the fissures of possibility in the heaped debris of our fear and vented spleens. God infuses them with tender mercies, and in spite of ourselves we slowly learn to breathe the Spirit’s air. We are not all led to God by miracles, but we are all led to God by grace.

We will never approach the river of wholeness except “the best we can,” which is not that great all the time, Nonetheless, we are going to that river, whatever the reason or unreason that moves us. We may be just muddling through, making progress in fits and starts, but we are nonetheless being drawn inexorably into the healing waters of God by hidden grace. And we are going to wade right in.

Knee-deep in unaccountable love, we are going to meet the One who gives us all our ragged victories and is sovereign over all our lives. And then we are going to get up and go back to our countries healed and grateful, carrying within us the holy ground of faith, the sacred soil of hope.

Healed and grateful enough to believe that whenever our stubborn rage subsides, God’s forgiveness waits.

1 thought on “Muddling Through”