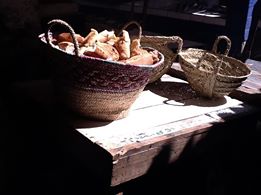 Early Christian writers sometimes spoke of holy communion as “the medicine of eternal life.”  Calling communion “medicine” implied a human condition that required powerful treatment — nothing less than the application of the presence of the risen Christ to the brokenness of the community, to the fragments of its soul. Communion was Christ’s kiss upon our wounds — an outward sign of the permanent offer of reconciliation with God and all creation: medicine of mercy, medicine of abundant life. To approach communion was to be diagnosed, admitted, treated and released to a new regimen of wholeness and health.

This way of speaking also implied a kind of preventative therapy: communion with Christ in the power of the Holy Spirit at the center of the church’s common life inoculated believers against the disintegration and estrangement that always threaten to destroy human hearts. Being in communion with the Healer and with all the convalescing companions built up one’s resistance to evil and warded off the infections of a divided heart, moral error and a superficial or evasive life. To be excommunicated, or  “excommunioned,” then, was to be in mortal danger, fully exposed.

“Medicine of eternal life” was also a way to describe a future: by participating in the eating and drinking, Christians were promised not only a measure of healing and wholeness in their present lives, but also perfect and permanent health in the life with God to come. To be in good health, to have been saved, meant to have been drawn into a great mystery, to be living on tip-toe, as Paul put it, towards health as yet completely unknown, not even imaginable. Yet in communion, the church understood itself to be privy to a fleeting glimpse of this future: whatever that wondrous wholesomeness will be, it will be at least something like this — the beloved as one in the Beloved, feasting.

To think of communion as medicine of eternal life could strike us as magical, superstitious, or fraudulent—Christian snake oil for needy psyches, trembling bodies, and suggestible hearts. And it would be so, were it not for its intractable attachment to the reality of flesh. Early Christian teachers understood, wisely I think, that one arrives at wholeness and right belief not via secret knowledge nor philosophical constructs, not via a private moment of illumination nor by some doctrinal bee you get in your bonnet. One is in possession of truth and salvation most truly when one encounters the body. That meant “in the church,” and most especially, in the daily hum-drum rub of service and love, tending to bodies, the neighbor’s and the world’s: in imitatio Christi, a body on the line.

Thus, examining the life Christians lead in their own bodies and their conduct toward other bodies has always preceded the reception of communion. Such a prelude brought home to the conscience the inherent contradiction of drawing near to the table of embodiment in Christ while indifferent or hostile or disembodied with regard to the neighbor. Healing, like all authentic Christian religious experience, has its final proof in a dispensation of love enfleshed in the tangible service of the least — When I was hungry, you fed me.