In the traditional reading of thi 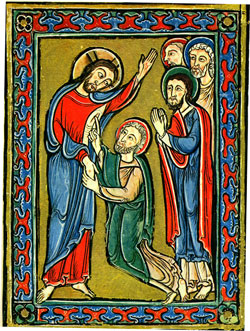 s post-resurrection appearance, Jesus rebukes Thomas for doubting and commends believers who come to faith without requiring the “proof” of nail marks. This reading still stands up, I think, even if many preachers these days like to present Thomas as a model for people who struggle to believe, reassuring their listeners that doubt is a normal, even necessary, part of a life of faith that is honest and maturing. Hardly any of the post-resurrection stories in the New Testament ignores the vexed nature of Easter faith (see for example, Lk 24:41; Mt 28:17). It is only fair and helpful, then, to point out that if we have trouble believing, we are not the first, and we are not alone.

What a “doubt is a good thing” reading of this story may miss, however, is its ecclesial dimension. When one looks at the story through that lens, Thomas may not be guilty so much of incredulity as he is of singularity. Asking for evidence (the same evidence Jesus had already granted to the others in v. 20) is not his biggest problem; refusing to trust the witness of sisters and brothers is. He doubts the resurrection of Jesus, but more significantly he doubts that the church has faith and wisdom to give him to supply his lack. Thomas wants a private experience, a revelation of his own, prefiguring not so much our modern intellectual rejection of particular articles of the creed as our unwillingness to grant the tradition any wisdom that does not first pass the test of private reason, personal experience, and emotional comfort. Thomas was “not with them” (v. 24) in more than a geographical sense.

Jesus does not commend unseeing believers (v. 29) because they accept the “fact,” much less the doctrine of his resurrection, but because they trust the church’s testimony. They open-heartedly receive the tradition of his rising. They are “together” in this handed-on faith that is not the private accomplishment of any one of them. The communal way in which we come to faith is an important preoccupation of this story, and of many others that were recorded, John says, so that we might come to believe (v. 31); but believing as such is not the final goal. The reason the evangelist is eager for us to believe in the first place is “so that [we] might have life” (v. 31), life with Jesus—a life found most richly and mysteriously through insertion in the fellowship of disciples. It is not for nothing that the other readings this Sunday focus on the fellowship (Acts 4:32-35; Ps 133; 1 Jn 1:1-2:1) and aim, in part at least, to impress upon us “how good and pleasant” (Ps 133) a company it is.

In contrast to the idea that a person comes to faith through an individually-achieved struggle for private conviction in this small moment now, the preacher might present coming to Christian faith as a shared project of trust and mutual traditioning in an ample fellowship of believers of all times and places who, by the grace and power of the Spirit, edify one another in strength, and supply one another in lack.

We might speak of the church in this season of Easter as a company of disciples learning to pool the gift of faith, eagerly inquiring into and trusting each other’s experience of God, and ever building thereby a great storehouse of small faith and great, new and seasoned, questioning and serene, from which we borrow and to which we lend, generation to generation, until he comes again.

Another tack for preaching the text is to remove the spotlight we always shine on Thomas and put it back on Jesus, the first born from the dead. His bodily appearance is full of mystery, to be sure, and one could get sidetracked attempting to explain the physics of his penetration of that locked door or the funky nature of resurrection bodies. Better to ponder instead the tender condescension of the Living One. He knows his disciples are afraid for their lives—he grants them encompassing shalom. He knows they need his continued presence and power—he breathes Spirit into their flagging hearts. He knows they have lost their sense of purpose—he commissions them to a ministry of witness and reconciliation. He knows they can hardly believe he is their Jesus, the same one who was nailed to the cross—he shows them his wounds. He knows Thomas is missing—he comes back the following week to make sure the Twin is not left out. He knows the last thing they need to hear is that they failed him miserably and he is disappointed—he utters not a single word of recrimination.

It is not surprising that in the presence of such immense tenderness, our text says (in what has to be one of the biggest understatements of the Bible) that the disciples “rejoiced.” The preacher could frame Easter in these terms, as the in-breaking of a new age to come in which there will be only compassion, peace, and restorative love like this, for all.

The preacher might also wish to inquire into the ethical edges of the text. A starting point might be Jesus’ refusal to blame and exact his due, thus breaking the relentlessly violent cycle of revenge by which the ordinary world turns. One might also explore further the text’s stunning image of a Risen One who in the life of glory does not leave his wounds behind—the signs of his passion for us persist in his new flesh, such that when we see similar scars in the flesh of the neighbor, or on the body of the world, we will recognize him; and as we place our hands in mending on the wounded ones he loves, we too will exclaim on awed and bended knee, “My Lord and my God!” (v. 28).